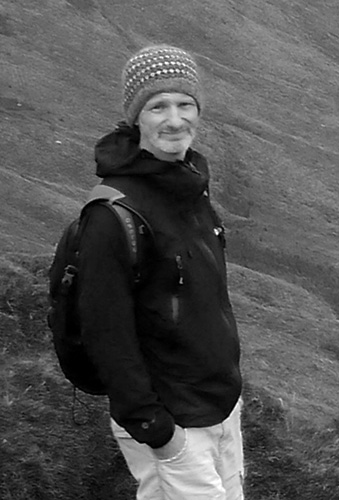 David has lived in Cornwall for almost all of his years and been lucky enough to enjoy its diverse and beautiful, wild Atlantic coastline. With his family David has spent countless days exploring the beaches, coves and rocky headlands along the north coast and the pretty fishing towns and idyllic estuaries that line the south coast.

David grew up on the water, pottering about in boats and paddling out on surfboards in the summer months and in winter walking the coastal path being battered by cold, grey mizzle and the ferocious westerlies. It's weather like this that shapes the Cornish people and inspires the imagination.

As a young man David studied at Falmouth College of Art and then went on to gain a Degree in Fine Art at Liverpool University 89-92. He has worked as a website and graphic designer ever since and in the past few years David also rediscovered a passion for photography and enjoy clambering about on cliff tops, moorlands and around harbours finding new ways to connect with the landscape.

The images are influenced and connected by a love of the sea and the rugged Cornish coast, creating simple compositions with flattened perspectives and a pallete taken from the blues, greens and greys of this beautiful part of the world.

Take Me With You II Art Print

You and Me Art Print

Two Of Us Art Print

by David Haughton
From £15
Add to bag

by David Haughton
From £22.50
Add to bag Buy one get one half price

by David Haughton
From £22.50
Add to bag Buy one get one half price